“Jacques was following his master as you are following yours… But who was the master of Jacques’s master ?” -Denis Diderot

May 2022
Participating in the group exhibition “In The Bunker: CHAC 2020” at the Diefenbunker Museum, an atomic shelter with the RACH collective. 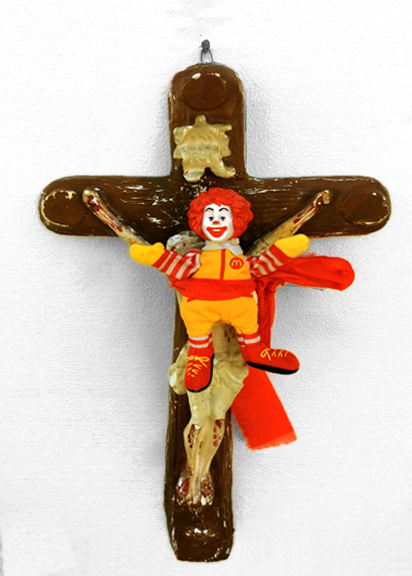 Clown (2020) is a sculpture with a traditional cross and Jesus with a McDonald’s figurine attached with a ribbon.

Projection: it is possible to have a modern approach to the human being which gives meaning to the word progress and which would be based not on material wealth, but on a quality of life rich in Nature. There is only one way out of ecological crises, and that is to consider the existing as a vast continuum in which the balance between the needs of living beings and the resources of the Earth must be found. We believe that human beings are different from animals, but we do not realize that this difference lies solely in the condition of being in the world of each other.

Reflection: My work has led me to a new understanding of life as belonging to the concept of continuity. We have built a culture and civilization through the connections we have made between humans, animals and plants. We can continue to raise livestock as long as we provide a good life for the animals. It is the ecological imbalance caused, among other things, by the agri-food industry that is to be avoided; it is the pollution from marine or land-based sources that increasingly contaminates soil and drinking water resources that must be stemmed. We note that the population recognizes the urgency of the situation, but the real problem lies in the lack of awareness and accountability at the highest decision-making levels of a country.

PROJECTS :
Year 2021-2022
Preparatory courses in chemistry and maths for studies in biology at Laval University (Quebec).

May 2022
Participating in the group exhibition “In The Bunker: CHAC 2020” at the Diefenbunker Museum, an atomic shelter with the RACH collective.

La liberté des pigeons (2017) is an installation where the representation of an orangutan behind a camouflage net can only be perceived with a flashlight or cell phone.

Conclusion: the unnatural human being, without the complicity of animals and plants, runs to his loss.
Anthropologists bring us several teachings: it is necessary to reintegrate Nature in order to regain the strength of cohesion and conservation that has characterized human beings since the first groupings of prehistory. In order to change things, we must develop a critical spirit towards society, the world of art, our own behavior, our way of disposing of goods and communicating with others. We have thousands of years of speciesism to change. The artist is not only there to embellish, he can also think his society and give himself a role.