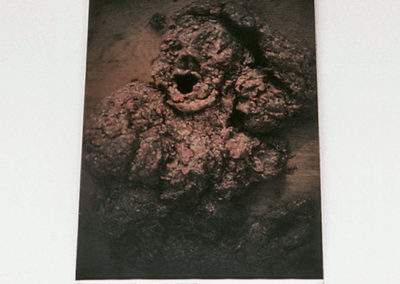 Marie and Mireille are two women figures sculpted from raw beef meat. Once fashioned, they were photographed to be blown up prints as part of an independent show called Invagination. One body is sculpted as if deeply anchored on the floor with the other seeming to float. Even without skin, the figures are identifiable by the placement of the head and limbs and the referring title. Another photograph named Lucie shows a small bush with red fruit made of meat, a sort of protein tree. Under the title Caroline, another photograph was conceived as a scream stemming from the flesh.

The compositions are classical, frontal and centred. These works are more about trying to duplicate the human form in an undreamed way than showing photography. As sculptures, they are about the spreading of organic matter in space. The viewer is invited to see the very matter we are all made of, the flesh, with an overall philosophical intent to unify the significant and the signifier.